“VR is perfect for things you couldn’t do in the real world, but not for things you wouldn’t do in the real world. Flying to the moon like Superman is okay. Participating in virtual mass murder—especially if it is designed to be realistic—is not. This is a big deal. Everything we know about training in VR points to the realization that the medium is incredibly influential on future attitudes and behavior. We don’t want to train future terrorists on VR, or desensitize people to violent acts.”

I assume Bailenson’s statement about virtual mass murder is specifically geared toward a game that would portray you as a serial killer, but I wonder how that works with military, war, and first-person shooter games. Bailenson also describes from the above book three things to consider when creating VR. Does it need to be in VR? Don’t make people sick? Be safe.

Superhot (published by Superhot Team) is a first-person “shooter,” made for a lot of platforms, but I played it for the first (and only) time on the Oculus Quest. I quote the word shooter because you can pick up different weapons other than a gun to kill your assailants. You are loaded into a white room, with a white box to your left with a weapon on it. The first task is to figure out how to grab a weapon and shoot or stab the bright red bodies walking towards you. These bodies explode into shards of red when you are successful in making contact and as they drop their weapons, you can grab them and other weapons also appear around the board as well. 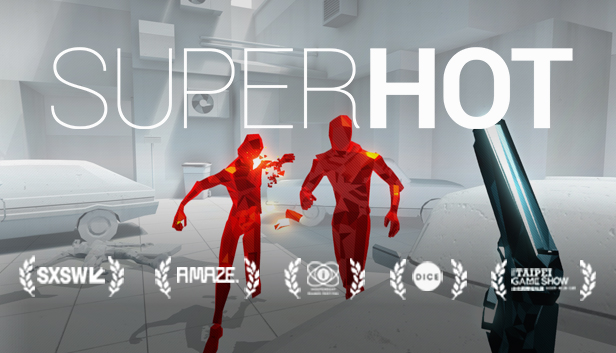 The game requires you to duck, stab, shoot, dodge, hide, and find your way through a maze of white and red. I found my anxiety level rising as more and more red bodies came my way; it seemed as if they were so close, so quickly, and I had no time to respond. I found the world very disorienting and one time ended up lunging out of the way into my parent’s television. However, my 16-year-old cousin had no problem. Response time has to be very quick in this game. I found it difficult to grab the weapons and often died trying to get a weapon before I was killed by an oncoming red body.

I did not play this game long, the physical room was in jeopardy, but I can imagine how this game would appeal to people who like first-person shooters. I am not one of those people, however, the striking, clean artwork of red on white was stunning. The precision needed to pick up and hit your assailant required a skill I did not have, but perhaps if I kept playing, this game might heighten my reflexes. I wonder if I would have the same reaction in a non-VR platform? A little more distance between myself and the game might make all the difference.

Where is Superhot on the mass-murder spectrum? Even though it is not designed to be realistic, there are elements of realism that make you react as if you are being attacked. How realistic does the experience need to be to be considered mass-murder? How does the anxiety and frantic speed provoked in order to maim a body differ in the virtual world? Is it easier to stab or shoot this body because of their faceless and shard-like appearance that explodes when attacked of shards? Is this body’s absent frame enough to remove the empathy the player feels when completing these violent actions?

When a trigger is pulled or a stabbing motion practiced, it is imprinted on the body. The impulse, instinct, and musculature are trained into the muscle memory of the player’s body. When the repeated actions are practiced they are then housed in the player’s body as they complete this game and after. This is why VR is used for flight simulators and quarterbacks as they research gameplays.

Where is the line drawn and who determines whether VR content falls under the realm of “training future terrorists” or “desensitizing people to violent acts?”

PreviousPrevious post: Unity for Liberation
NextNext post:“…It is not your business…”