On Monday I showed where I was in my project Tilt World which is investigating a body in a virtual world (Google’s Tilt Brush) and objects and bodies in the physical world. 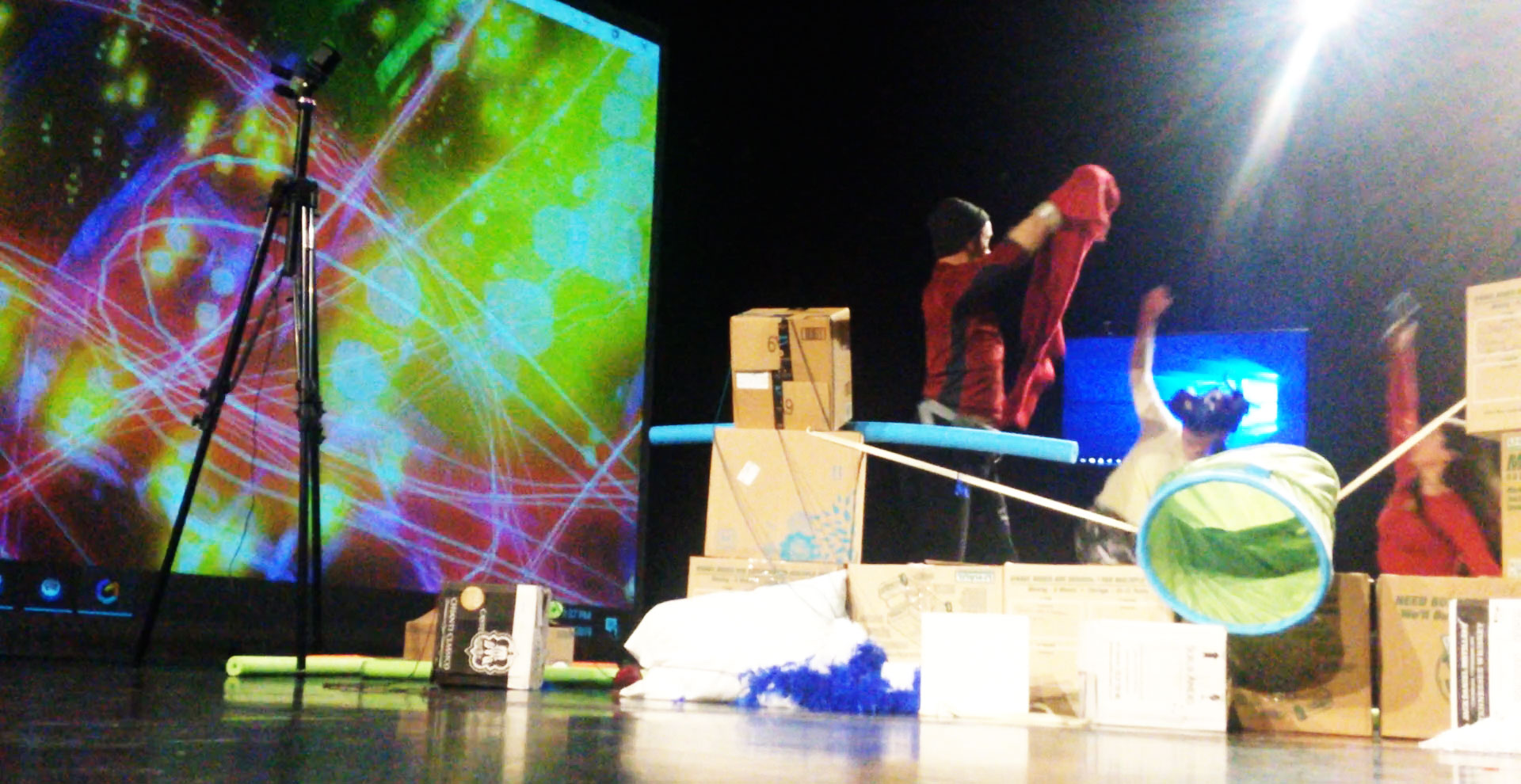 This iteration of the work included three performers. At the beginning of the work, I wore a red face mask and was painting a red house in the virtual environment with Tilt Brush’s wand in front of a wall of cardboard boxes.

Later, a dancer in a VR headset was traced by myself. I removed the face mask while she built her own virtual environment to move inside of and then I took the wand again to add to the environment that only she could see. Only the person in the headset can see the painted world.

All the while, a third performer was tasked with building and deconstructing environments with cardboard boxes, pool noodles, boas and small toys.

This iteration stemmed from my “Sandbox session” in my research class (a Sandbox could be seen as a rehearsal or improvisational physicalization of some ideas).

More clearly, the roles were:

I received three really interesting moments of feedback from this iteration.

1. The audience participation that I have talked about for a while was non-existent in this version. This is so weird because I didn’t realize I deleted this but I feel exactly as Oliver Herring said in his book TASK.

“The first TASK was small and a little awkward. Initially, I approached TASK as a performance. It seemed like the most simple and uncomplicated way to think about it. Although I don’t think of TASK as a perforamnce anymore, the structure of the inaugural TASK was the same as it still is.” – Oliver Herring’s TASK

So, I have another idea for the second iteration to incorporate the audience from the beginning in perhaps a TASK-like way.

2. During my Sandbox there was a role of care that was included that wasn’t in this role. This is true, but perhaps the builder also needs to be tasked with moving around the person in virtual reality so there is something to protect them from?

3. I needed to be clear what I wanted people to get out of this whole thing. I don’t know the answer to this yet. I think I replied with I wanted each person to feel like they built a world but are watching other worlds built in an alternate reality? I’m not sure that is true but I think this comment links to the idea of roles or tasks. And if so, the audience needs to have one.

One thought on ““a little awkward””